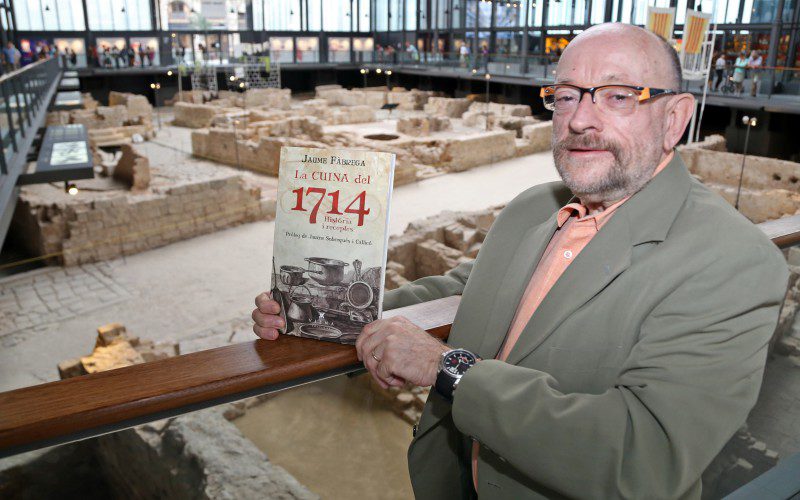 Apples stuffed with meat, a plate named after the battle of Almansa, caterpillar sauce or pancakes, are some of the dishes that Jaume Fàbrega, the reknown culinary writer, includes in his latest cookbook “Cuisine of 1714; History and Recipes”, which is edited by Viena this September.

«1714 is a key moment in the history of European cuisine. Two cooking varieties intersect; the medieval cuisine, which fed the monastic orders and aristocratic houses with a selection of creams, sweet and sour flavours, lots of fruit mixed in with meat or fish, a wide range of spices… and modern Catalan cuisine, which was based on fried tomatoes, pickles, macaroni, rice, casseroles, noodles or fish stew. »

In your book, you talk about tomatoes… How did the discovery of America influence the period’s diet?

«It was revolutionary because tomatoes, peppers, chillies, potatoes, beans and chocolate were incorporated into our diet. Vanilla was discovered around the Cataluña area and coffee came from Turkey. Nevertheless, these ingredients didn’t have an immediate acceptance. The last thing to be introduced into our diet was potatoes. This was because The Church believed potatoes were related to hell, as they were buried underground. This belief is underlined by Baron Maldá’s quote (which you can read in the book), where he states he would eat all sorts of vegetables except potatoes. »

Many of these recipes are cooked with lard. Was it a high-calorie diet?

«No. There are a lot of prejudices, but it was actually an incredibly balanced diet based on vegetables. Only 3% of what was consumed in that time was meat, basically pork. Actually, every house had a pig. Chicken and beef were uncommon, and only wealthy families or friars could afford it.»

«Traditionally, the culinary space was presided by a fire on the floor. Nevertheless, during the mid-eighteenth century, a revolutionary element appeared; stoves built into the wall. This new creation eased the work for housewives, as they didn’t have to crouch while cooking. This conception has been maintained up until the last decade of the sixties. Another essential element you could find in a kitchen those days was the table. A curious anecdote from the year 1714 highlights the suppression of the Bourbon Monarchy who ordered to bind the knives on the tables. It was a way to reduce the danger of citizens.»

So they didn’t have an oven?

«No. In those days, the oven was a cooking system which consisted in a closed container, covered with coal. Other elements from that period were the pantry and the cellar, only owned by wealthy families, of course. Also, there was usually a closet or a few shelves to store kitchen. This type of furniture is still preserved in some farmhouses in the Empordà. There were also silver or wooden dishes and a sink, made out of a clay bowl, to wash them. »

The hooks we use in our kitchens nowadays, the ones used to hang tools and pans… Are they an influence from that time?

«Totally. Vintage-style kitchens, so fashionable nowadays, are inspired by yesterday’s baroque kitchens. They were very practical and everything was at hand. In those days, housewives already used grills, pans –mostly made out of copper-, ceramic pots… There was even a special pan used to fry eggs with a long handle to set on the fire, on the floor. Additionally, as they cooked their own cured hams, houses were equipped with all the necessary utensils to treat the meat and preserve it.”

Who cooked in those days?

«Basically women, except in the convents. Actually, thanks to the friars, Catalan cuisine has been preserved up until now, for they wrote down all the recipes they cooked. The Borbon repression was a terrible time, especially in terms of culture. The monarchy prohibited all sorts of books, festivities and styles. Before 1714, Barcelona was the city of joy. It gathered the most famous cafés in Europe, Italian restaurants, English and Scottish distilleries and it also sold all sorts of goods from around the world.»

Has our taste changed a lot since then? 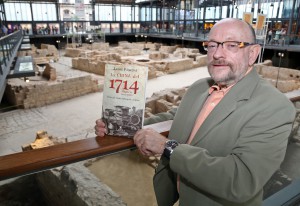 «We have returned to the “baroque tastes”. In other words, modern society consumes a lot of bittersweet flavours and cooks a lot of vegetarian food, which is similar to the 1700’s diet. Stews and noodles were very common in those days and still are nowadays, in the so-called “Mediterranean” diet. The “Mediterranean” diet doesn’t actually exist, it’s just a label or, might I say, a fashion. The Catalan cuisine followed the Nordic techniques for cooking. That is to say, they cooked with lard -not olive oil- and ate animals such as ducks, geese, buckwheat (that came from Russia) mixed with products from America. I say the Mediterranean diet didn’t exist, because the Iberians didn’t even drink wine, they drank beer. Wine wasn’t imported until much later, from central Asia.”

What do you think about the international recognition Catalan cuisine is receiving nowadays?

«I don’t think it’s by chance…. Europe’s first great chef was a Catalan: Master Robert, who was chef to the king of Naples in the fifteenth century. And it doesn’t end there, the first major cookbook, “The Book of Coch”, was written in Catalan personally for him. »

Nowadays, however, it seems we are experimenting with food like if it were a science project.

«They call that “cuisine”… But I agree with Josep Pla, who used to say “the only food worth eating is the one cooked at home”.