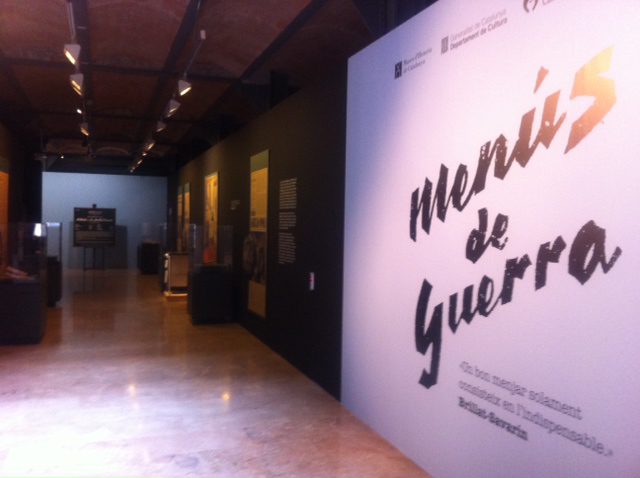 The History Museum of Catalonia in Barcelona is showing an exhibition about the ingenious cooking adjustments during the Spanish civil war, which will be displayed until the 28th of September.

Who hasn’t heard about their grandparents infancy dramas? or, in any case, adventures? You know what we’re talking about… the rough times of  rationing, when the famouse «tortilla de patatas» was made without the «patatas». Well, this quick exhibition -you’ll go through it in less than half an hour- traces the evolution of gastronomy back in the days when the motto was; «What may seem as deprivation is easily turned into a sharp resourcefulness», as the reknown cook Joan Vila once said.

Before the outbreak of war, though, Catalonia already had notable chefs who published their recipes. This would be the case of Ferran Agulló (Pol) for example, author of the catalán masterpiece «Llibre Cuina», which was published in 1928 with a first printing of 6,000 copies. Other recipes that also stand out are those of Ignasi Domènech, who wrote «La Teca» (1924) and «Llaminadures» (1924).

During the mid-20s, Catalonia lived a great (cooking) revolution, as the first gas stoves were starting to pop up. In the aformented exhibition, you will be able to see a real 1927  Maurer Prometheus model. We should also point out that, as the brouchures of he time announced, «Gas stoves prevent failures», which meant one could cook while also doing other tasks. Being able to regulate the gas power allowed one to actually not burn food… in those days, that was a total breakthrough!

After the war, the one and only Ignasi Domènech (a catalán cook and gourmet editor) published a cookbook intended to aid families during the times of scarcity. Through Cocina de recursos (1941) (Kitchen Resources) the author explained his own experiences and the difficulties he survived, as finding food in post-war Barcelona was nearly impossible. In his book, one can read quotes such as «The obsession these final months is food» or can also (try) to follow a recipe to cooking «War Tortilla with simulated potatoes.»

Needless to say, many of these books were aimed at women, for they had to excel in the art of cooking in order be «good housewives». The exhibition includes images taken in different locations,  such as the Women’s Institute of Culture, where many course about «table and the kitchen» were offered. Josep Rondissoni, one of the most prestigious cook (and teacher) at the time, warned: «The one responsible of a kitchen’s care and administration must ensure total order and sanitation, which can be done in a minute’s time if one has the will…» «Villeroy Mullets», «Hockey Club entrecote» or «Palestine hale cutlets» were some of the dishes taught in these courses for women, … before the war, obviously. Rondissoni was also editor of  «Menage«, an avant-garde magazine which featured all sorts of knacks for dedicated housewives. The magazine was published from 1931 to 1936.

Another reknown cooking professor of that time, Joan Vila, was born in 1882 in Blanes. After studying at the most important restaurants in London and Paris and stopping by San Sebastian and Madrid, where he began teaching, Vila returned to Barcelona to open his own Academy. He taught the ladies of the Catalan bourgeoisie the art of cooking. I’m guessing it looked like a nowadays’ Thermomix cooking class….

The exhibition ends with by explaining the difficulties restaurants in Barcelona suffered. During times of war, these were only allowed  to serve two courses per person. Moreover, during 1938, when the supply of food worsened, restaurants could only offer one course. In the museum’s library, you can find many of these recipes, a nice way to «re-cook» past flavours.