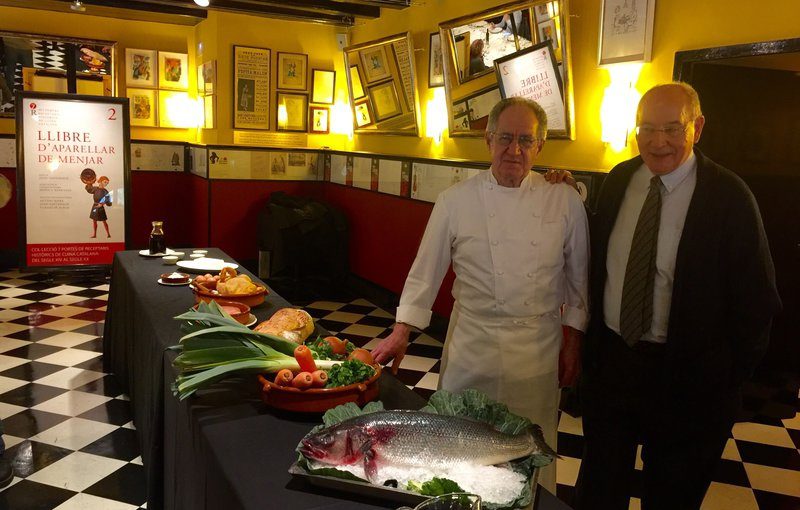 The volume, edited by Professor Joan Santanach, presents a set of recipes that show the likes of Catalan moneyed classes of the late Middle Ages, with dishes based on birds and other animals cooked on the grill and served with delicious sauces. Cinnamon, pepper and ginger are among the species most used at that time. These are recipes far from the popular way of cooking. Sophisticated and rich with many flavours from exotic ingredients. It is estimated that the texts were compiled in the mid-fourteenth century or later.

This recipe book is the largest of the catalan medieval cuisine, however the oldest is the Libre de Sent Sovi. The original book is at the University of Valencia, while the «Llibre d’ Aparellar de menjar», which also contains some texts from Sent Soví, is a single manuscript preserved in the Library of Catalonia, and so far inaccessible to the general public.

The volume is considered a basic recipe of the Catalan culinary tradition and is projected to today.

Some of the peculiarities of this ancient recipe book is the prologue in verse that suggests that it is not merely a compilation of recipes, but » there is a certain internal consistency based probably on a liturgical calendar ,» explained Santanach on the day of the presentation. To begin with, in the introductory text one can distinguish between meals of meat and lent and then divided into four groups of preparations: sauces , fish , hunt and spoon meals.

The volume of Barcino, which is part of a collection dedicated to the kitchen, includes transcription of the original texts as well as adapting to modern catalan. The phrase interrupted in the recipe number 279 indicates that it is incomplete. The next book in the collection of Barcino will be the Llibre de Coc, printed in Barcelona in 1520 .